Cross country running is a beautiful sport enabling you to stay fit while spending some time in nature. It is an athletic discipline in which competitors run in long-distance races that usually take place on open-air, non-paved running paths, over natural surfaces such as dirt or grass. This is one of the main differences between the cross country and the marathon race. Overcoming weather conditions, such as muddy or sloppy terrain, is therefore very important in this kind of race. Moreover, the course, which is normally 4–12 kilometres (2.5–7.5 mi) long, may include woodlands, open country, hills, rivers, and sometimes gravel road.

People of all ages, both amateurs and professionals, compete in cross country running. It can be both an individual and a team sport. In the latter case, it is made up of six to nine athletes. Events are typically held during autumn and winter. The sport originated in the early 19th century England, from a game called “paper chasing”, or “hare and hounds”. The “hares” started several minutes before the “hounds” and left a trail of paper scraps to be followed by the “hounds,” whose aim was to chase down the “hares”. This is also where the modern nickname for cross-country runners, “harriers”, comes from. The first official competition in England was held in 1837, and the first international cross country race (between England and France) took place in 1898. 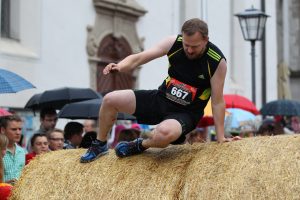 Cross country used to be an Olympic sport but was banned because many competitors blacked out during the 1924 Summer Olympics in Paris due to an unusually intense heat wave. Since 1928, cross country has been contested only as part of the modern pentathlon. In 2018, it will have a separate competition at Youth Olympic Games in Buenos Aires.

Part of the beauty of cross country running is that it does not require too much investment in professional equipment. You will need shorts, a vest, and a good pair of running shoes. Best option are cross country spikes, suitable for grassy, muddy and slippery conditions. What are you waiting for? Grab your gear, head to the local park and have fun!